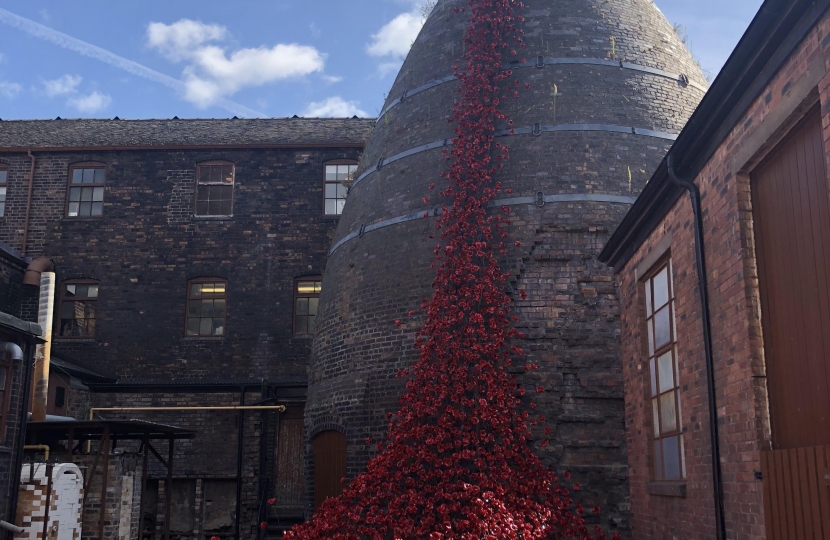 One of the first campaigns I was involved with upon becoming Deputy Leader of Stoke-on-Trent City Council, was the bid to host part of the iconic Tower of London ‘Blood Swept Lands and Seas of Red’ as it toured the country between 2016 and 2018.

Our initial bid was unsuccessful, however given the strength of feeling locally that the poppies should come to the city where a number had been made, I was determined that we would not give up. What followed was several months of negotiation before, in 2016, we were able to confirm that they would be coming to Stoke-on-Trent, and in 2017, to Middleport Pottery as the location.

A huge amount of work went into hosting the sculpture, both from Middleport Pottery as the location and Stoke-on-Trent City Council as the principle partner, as well as many others besides who helped put on an incredible programme of supporting activities. Over 100,000 people saw Poppies: Weeping Window and it delivered an estimated £4m economic boost for the city.

Over 122,000 visitors saw Poppies: Weeping Window in Stoke-on-Trent over the six- week period that the sculpture was in the city as part of 14-18 NOW’s UK-wide tour of the poppies.

The number smashes the 49,000 visitor estimate that was initially set for Weeping Window in the city.

The figure includes 94,000 visitors to Middleport Pottery and just under 28,000 visitors experiencing the sculpture via the canal towpath opposite. Over 7,500 visitors attended on the final weekend alone which was also part of the national Heritage Open Day initiative.

While Weeping Window has drawn an incredible amount of attention from people in the local area with the majority of visitors drawn for Staffordshire, Cheshire and Derbyshire, it also attracted people from London, Liverpool, Chester and Birmingham. The sculpture has even captured the interest from those further afield with some international visitors coming from Dubai, Istanbul, Zurich, Auckland and Athens.

In addition, over 300 people volunteered and gave their time during rain or shine to support the sculpture at Middleport Pottery as well as volunteers for the Canal and Rivers Trust. Ages ranged from between 16 years old to over 70 years old.

Weeping Window was complimented by three independent campaigns of activity to bolster visitor numbers in the city, Stoke-on-Trent Remembers, Summer in Stoke-on-Trent and Burslem Summer of Art. Through these a number of local businesses, organisations and tourist destinations staged additional activities and events for people to attend while in the city. Heritage Open Days also took place while Weeping Window was in the city.

During the two weeks in September when schools returned after the summer holidays, 59 groups including 2469 learners from schools in Stoke-on-Trent and Staffordshire visitedWeeping Window.

Cllr Abi Brown, deputy leader for Stoke-on-Trent City Council and chair of the steering group for bringing Weeping Window to the city said: “These final figures show what a massive success the artwork has been in the city. It really does demonstrate that Stoke-on-Trent can not only have aspirations to host UK-significant artworks but also how we can work together to put the city on the map. My thanks also extend to all the other groups, organisations and individuals that have given their time to help make the summer of activity happen in the city. It’s testimony to everyone involved.”

UKHBPT / Middleport Pottery director Clare Wood said: "The response to Weeping Window has been hugely positive. Much of the feedback highlighted how well the event was organised, the friendly welcome people received and a sense of elevated pride and ambition for the city. This has been a wonderfully successful partnership with Stoke-on-Trent City Council and 14-18 NOW, which we are proud to have been part of.  The team at Middleport Pottery, including our dedicated volunteers, have truly made this installation an unforgettable experience for thousands of visitors.”

Baldwins Gate CE Primary School was one of the schools who visited Weeping Window. Pupils from the school said: “Thank you for allowing us to visit Middleport Pottery and the opportunity to view the Weeping Window. It was special because only a few of the children had managed to visit in the holidays.

All the staff and helpers were really brilliant during the visit, guiding or giving extra details. We also very much enjoyed seeing the bottle oven.

A thought- provoking visit and our thanks to everyone at Middleport Pottery who made our visit such a wonderful experience.”

Middleport Pottery was one of the last tour venues before Weeping Window moves to its final presentation at IWM London, after which it will become part of the Imperial War Museums’ collection.

Stoke-on-Trent is officially recognised as the World Capital of Ceramics, and Middleport Pottery has been operating since 1889. During the First World War demand for the ceramics goods made in the area greatly increased. These included tableware for hospitals, homes and the military; propaganda-ware, including small ceramic tanks and battleships; plates with patriotic designs or messages on them; and ceramics to mark both the early stages of the war and the Armistice at the end.

Weeping Window is from the installation ‘Blood Swept Lands and Seas of Red’ – poppies and original concept by artist Paul Cummins and installation designed by Tom Piper – by Paul Cummins Ceramics Limited in conjunction with Historic Royal Palaces. The installation was originally at HM Tower of London from August to November 2014 where 888,246 poppies were displayed, one for every British or Colonial life lost at the Front during the First World War. Together, the sculptures Wave and Weeping Window are made of over 11,000 poppies.

Stoke-on-Trent was integral to the original installation 'Blood Swept Lands and Seas of Red' at the Tower of London in 2014. Stoke-on-Trent based company Potclays provided the clay that the ceramic poppies were created from, and advised the artist on technical aspects of the clay.  Johnson Tiles, who are also based in Stoke, were approached to assist and contracted to produce hundreds of thousands of the poppies.

The tour has been made possible by the Department for Digital, Culture, Media and Sport (DCMS), the Backstage Trust, the Clore Duffield Foundation and the National Lottery. DAF Trucks are the transport sponsor for the UK presentations, and 14-18 NOW is delighted to partner with DAF on making this historic project a reality. The learning and engagement programme for the poppies tour is supported by the Foyle Foundation. Storage of the sculptures is generously provided by MTEC.