We Are Levelling Up Stoke-on-Trent 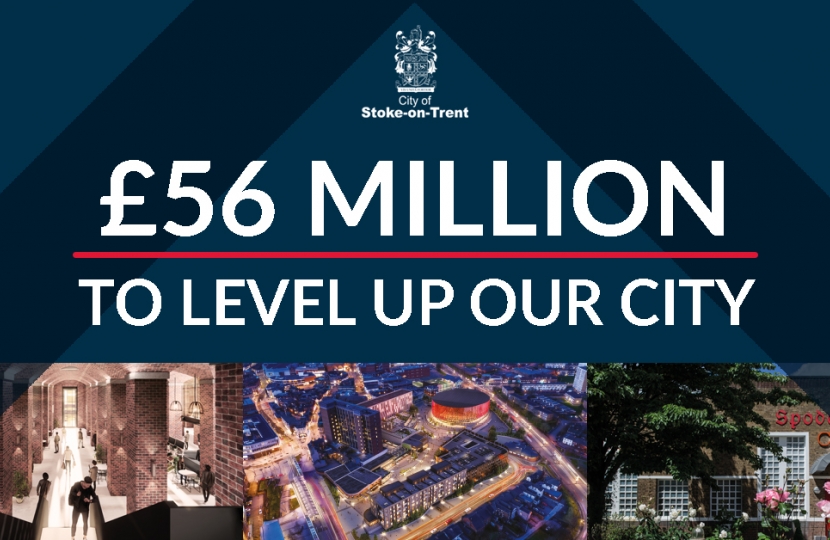 The Government’s Levelling Up agenda has been front and centre in recent months, presenting Stoke-on-Trent with the opportunity to put forward 4 bids for the Levelling Up Fund (LUF). After months of extensive work and engagement, the 4 bids we submitted were;

The Chancellor of the Exchequer, Rishi Sunak, announced the successful bids in October 2021, and we were delighted to hear that we would had won ‘not one, not two, but three bids’ for the ‘wonderful city of Stoke-on-Trent’.
We were disappointed not to receive funding for our transport bid, however the £56m - the largest sum received by any city through LUF - will mean residents can soon expect to see work underway in a number of locations across the city. This will come hot on the heels of existing City Council plans to bring back into use heritage town halls in Longton and Tunstall, open up the Spode site, and maintain the excitement created by the Smithfield development and surrounding Cultural Quarter in the city centre.
We will continue to push for the investment in transport that our city needs, because as detailed in our prospectus, we know this is key to Stoke-on-Trent’s ongoing success.

At the same time, Stoke-on-Trent was also given £2.8m of Community Renewal Fund cash, out of a possible £3m, as one of 100 ‘Priority Places’ for the scheme. These projects will all help local residents ti get back into work and improve their skills in a variety of ways. It’s fantastic to see that the majority of these projects will also be delivered by local organisations.

Our LUF success has led to a plethora of media coverage, both locally in the Sentinel, including on the Community Renewal Fund, and BBC News Online, as well as on Cross Rhythms Radio.

Huge excitement today to hear the Chancellor announce Stoke-on-Trent’s success in the budget - receiving three Levelling Up Fund bids (out of a possible 4), plus £2.7m of Community Renewal Funding also.